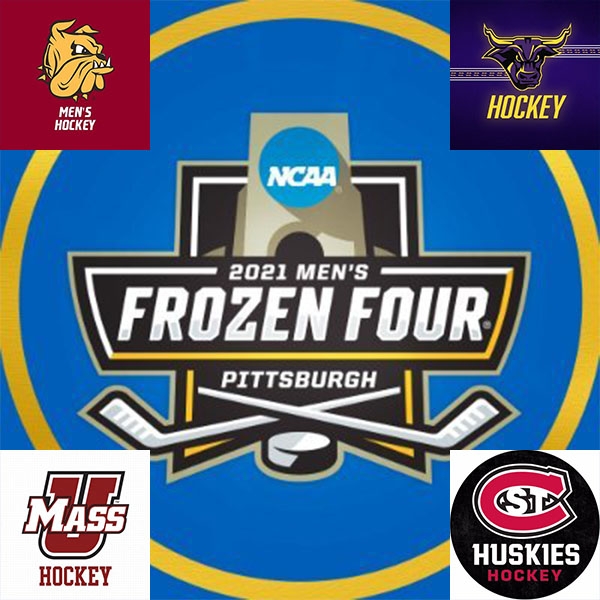 This year the Frozen Four in Pittsburgh’s PPG Paints Arena will feature a powerhouse along with a trio of squads looking to secure their programs first national championship.

The Bulldogs got a free pass in the Midwest Regional semifinals as Michigan had to forfeit due to positive COVID-19 cases within the program. In the regional championship UMD had to fight for an opportunity at this year’s Frozen Four. They defeated the University of North Dakota Fighting Hawks 3-2 on 5OT. This game marks the longest game in NCAA hockey history (mens or womens). The five overtime game lasted 2 hours 22 minutes and 13 seconds before Minnesota Duluth was able to score the game winning goal, propelling the Bulldogs to another Frozen Four appearance.

Minnesota State Mankato had to overcome a two goal deficit in the third period of their West Regional semifinals to defeat Quinnipiac 4-3 in overtime. The game winner was scored by Minnesota Duluth head coach Scott Sandelin’s son Ryan Sandelin. The Mavericks region championship game wasn’t quite as intense as they dominated the University of Minnesota Golden Gophers 4-0. The victory over rival Minnesota earned Minnesota State Mankato their first Frozen Four appearance in school history.

St. Cloud State powered through two teams from Boston, Ma. in their Northeast Regional to earn a spot in their second Frozen Four in school history. In the regional semifinals a second and third period offensive explosion sprung the Huskies past Boston University 6-2. The next night St. Cloud State used a three goal second period to down Boston College 4-1 in the regional championship game. The Huskies are now headed to their second Frozen Four in school history.

The University of Massachusetts Minutemen breezed through their East Regional only giving up one goal in two games. First in the regional semifinals the Minutemen scored in all three periods taking down Lake Superior State 5-1. The region championship seemed just as easy for Massachusetts as they shutout the Bemidji State Beavers 4-0. The Minutemen will now be participating in the second Frozen Four in program history.

The Frozen Four will begin on Thursday, April 8 and conclude on Saturday, April 10.