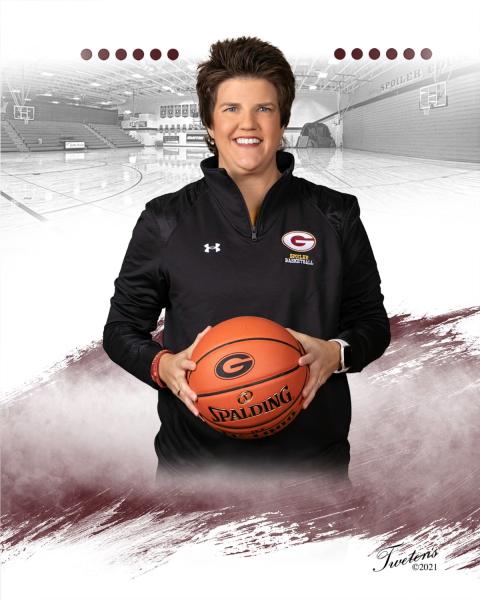 (Grafton, ND) -- After 21 seasons as the head coach of the Grafton Spoilers girls basketball program, Laurie Sieben has announced she will be stepping away from the sidelines. Sieben, a St. Thomas native, confirmed the news to Flag Family Media Sunday morning. She finishes her coaching career with a record of 356-147.

Sieben led the Spoilers to a second place finish in this year's State Class "B" Girls Basketball Tournament at the Betty Engelstad Sioux Center in Grand Forks, falling to the Kindred Vikings 64-40 last Saturday. It was the second straight trip to the state championship game for the Spoilers, who won last year's state tournament 64-50 over Central Cass.

Sieben, who also will be retiring from her position as a physical education teacher in the Grafton Public School District, will hand the reigns of the team over to assistant coach Wade Haugen. Haugen, a Valley City native, has 11 years of experience under Sieben.

"I'm so gratefuly for Coach Sieben and all she has taught me," Haugen said in a text message to Flag Family Media. "She has taught me to be a better coach and person. I'm so grateful to be selected to take over the Grafton Girls Basketball program, and continue the strong culture that has been built here."

Sieben says she plans to spend more time with family -- including watching her twin daughters play college basketball. Cassie and Carlee Sieben recently finished up their freshmen seasons at their respective schools -- Cassie at Mayville State, and Carlee at the University of North Dakota.