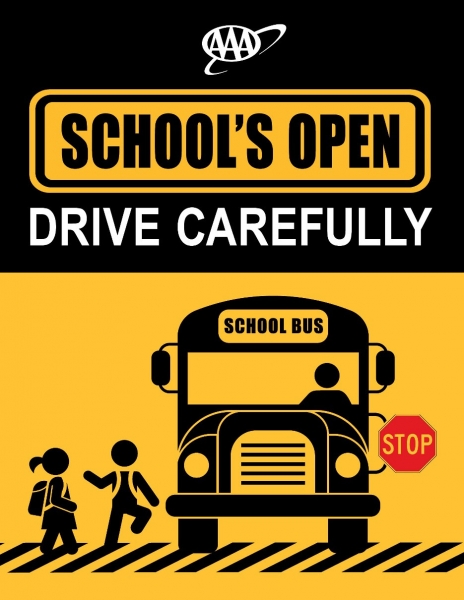 (Fargo, ND) -- As North Dakota roads are about to get more crowded with students and teachers returning to school, AAA is launching its “School’s Open Drive Carefully”  campaign.

As part of the annual campaign, AAA reminds drivers to slow down, eliminate distractions and obey traffic laws when passing buses and driving through neighborhoods and school zones.

As schools open their doors for the new school year, drivers can expect an increase in:

“Drivers should have a heightened sense of awareness from the moment they back out of the driveway,” said Gene LaDoucer, regional director of public affairs for AAA – The Auto Club Group. “Kids will be making their way to schools or bus stops early in the morning and again in the afternoon. Many of them might not be looking for you, so make sure you’re looking for them.”

School zones are areas with high vehicle, bicycle and pedestrian traffic. Children on bicycles can be unpredictable and can make sudden changes in direction.

When driving through a school zone, lower your speed and increase your awareness, to ensure you can respond to any potential hazards on the roadway.

Children should arrive at the bus stop at least five minutes before the bus is scheduled to arrive. Parents should teach them to play it SAFE:

Stay five steps away from the curb.

Always wait until the bus comes to a complete stop and the bus driver signals for you to board. Be alert and remove headphones so you can hear oncoming traffic.

Face forward after finding a seat on the bus.

Exit the bus when it stops and look left-right-left for cars before crossing a street.

Motorists are reminded to:

Eliminate distractions. Research shows that taking your eyes off the road for just two seconds doubles your chances of crashing. Children can move quickly; crossing the road unexpectedly or emerging suddenly between two parked cars. Reduce risk by avoiding distractions like using your cell phone or eating while driving.

Share the road. Children on bicycles are often inexperienced, unsteady and unpredictable. Slow down and allow at least three feet of passing distance between your vehicle and a bicyclist. If your child rides a bicycle to school, require that he or she wear a properly fitted bicycle helmet on every ride.

Talk to your teen. Car crashes are the leading cause of death for teens in the United States, and nearly one in four fatal crashes involving teen drivers occur during the after-school hours of 3 p.m. to 7 p.m.

Get evidence-based guidance and tips here.