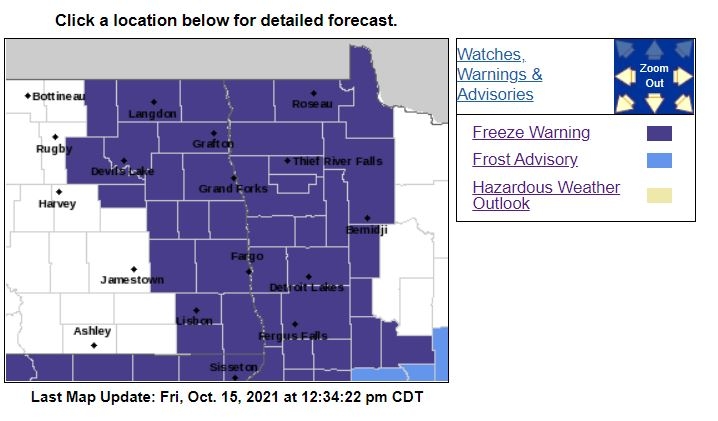 Well, it is finally here... Our first freeze warning has been issued across eastern North Dakota, into northwest Minnesota. This warning goes into effect midnight tonight and expires at 9:00 AM tomorrow Saturday morning. Not everyone will hit freezing temperatures but widespread lows as low as 29-32 will occur across the region! Those who don't drop down to 32 degrees or lower (freezing), will experience widespread frost! So cover the gardens tonight and bring sensitive plants inside!

Here is a portion of the NWS KGFK freeze warning for tonight...

"FREEZE WARNING IN EFFECT FROM MIDNIGHT TONIGHT TO 9 AM CDT SATURDAY...

* WHERE...All of eastern North Dakota and the northwest quarter of Minnesota.

* ADDITIONAL DETAILS...Temperatures will be varied throughout the valley, with some areas dropping below freezing while others hover around the freezing mark." -NWS KGFK 10-15-21

There is good news though! After a cold frosty start to saturated morning temperatures rebound! The weekend is going to be sunny and seasonably warm on both Saturday and Sunday. If you have extra vacation days saved up, take off Monday as heat carries into Monday with highs close to 70 with sunny skies. After Tuesday temperatures take a slide down into the 50's and 40's for highs with a slight chance for rain on Wednesday, but I think that will slide to our south through South Dakota and southern Minnesota.

Friday: Mostly cloudy with a few light sprinkles tracking SE. Cool today with a high of 50, decreasing clouds into the late afternoon with west winds between 10-25 mph.

Friday night: FREEZE WARNING (9:00 AM Saturday morning). A low of 33 tonight under clear skies and west winds between 5-15 mph. Widespread frost is expected with temperature possibly dipping below freezing.

Saturday night: Mostly clear, some patchy frost possible in low lying areas with a low near 36. SW winds between 5-15 mph.

Sunday: Another great day! The pick day of the weekend, Mostly sunny with a high near 68. SW winds turning SE between 5-10 mph.

Tuesday Partly cloudy, a high near 65 with northerly winds between 10-25 mph.

Wednesday: Partly sunny, a high near 54, northerly winds between 10-25 mph. A 20% chance for some light rain but I believe that will push south of I-94 through SD into MN. Could push a little further and affect the F/M area.

Extended Forecast... A battle between models!?

Looking at the end of next week two long-range computer models are having a dispute with the temperatures, but both agree on cooler weather. The European models have us remain pretty cool with highs in the low to mid 40's while the American GFS puts us a little warmer with highs in the upper 40's to low 50's. Both models have good agreement on overnight low temperatures bouncing down close to freezing again. Along with lower temperatures, it looks mostly dry with a slight chance for some light precip Friday evening into Saturday morning.