Freezing Temperatures... More Rain? Where Did The Warmth Go?! 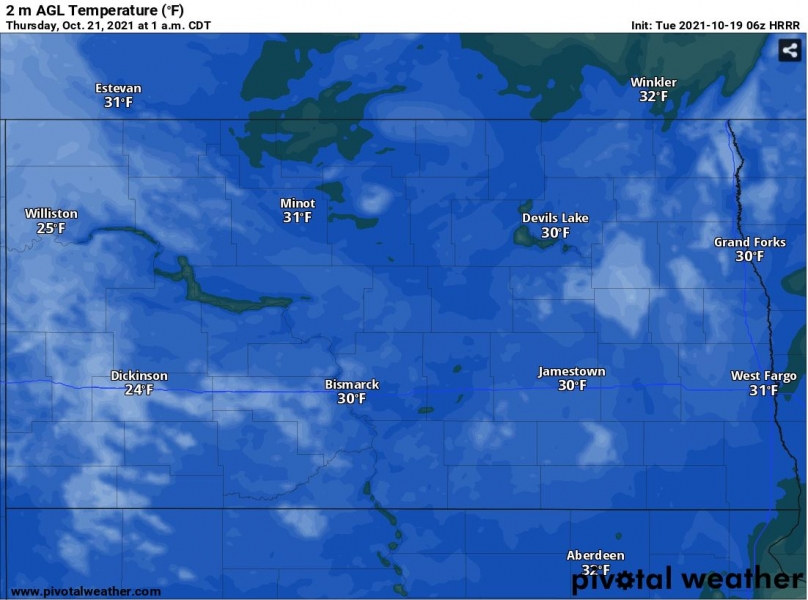 After another warm weekend and seasonably hot Monday (10/19/21) temperatures are taking a dive! We went from a high of 77 in Fargo yesterday, (just 2 degrees short of another record) to the upper 40's today, and 40's through the end of the week. This is due to cold front passing through this morning, bringing much cooler air through the week with overnight lows below freezing midweek (Wed, Thurs, and Friday night), and breezy conditions through Wednesday. There is a slight chance for a few scattered showers on Wednesday, but a better chance at the end of the weekend.

As we go through today winds will increase and switch to the north between 10-20 mph gusting up to 30. We will see increasing clouds to a mostly cloudy afternoon, with a secondary high near 52. What is a secondary high? Well, the actual high temperature today has already occurred, near midnight around 57 degrees. Temperatures have dipped into the mid 40's this morning but will warm back up just a bit. We stay mild tonight with a low close to 39, staying breezy and cloudy. There is a 30% chance for a couple of scattered showers for Wednesday, but most will stay to our south. Wind will remain on the breezy side and cooler temperatures.

The end of the week will be just below average with highs in the mid 40's to lower 50's through the end of the week and weekend. Winds will lighten up for Thursday and Friday but pick back up for the weekend. After Wednesday the next chance for rain comes at the end of our weekend with another larger-scale system.

Is there any more heat?

Seasonable warmth yes but summer heat is unlikely. Our best chance to see some warmer temperatures will come on Monday and Tuesday of next week. Into our weekend and the beginning of next week another larger scale low-pressure system will track into the Northern Great Plains. This would bring wider spread rain to the region. Behind that, on Monday winds will switch from the south riding another low. With these southernly winds will come some seasonable warmth!

Could we sneak out one more 70 degree day?

It is possible, it looks like the best chance would come on Tuesday of next week if the placement of this low verifies (which will likely change a bit since were looking a week out and trying to grab more in detail information) I think the better bet would be in the upper 50's to mid 60's.

Tuesday: Increasing clouds with northerly winds between 10-20 mph gusting to 30. Temps in the 40's through most of the day.

Wednesday: A high near 44, NE winds between 10-25 mph. Cloudy with a 30% chance for some scattered showers, most will stay south of Fargo along the border of SD into MN.

Wednesday night: Clearing skies winds lightening up with a low near 28.

Weekend: Split weekend, Partly cloudy on Saturday, A 40% chance of showers on Sunday. Temperatures climbing to the low 50's with above freezing lows and winds between 10-25 mph.

What is average for this time of year?

Highs are in the lower 50's with lows close to freezing. The average precip for October is 1.39 inches, we have currently received 2.23". 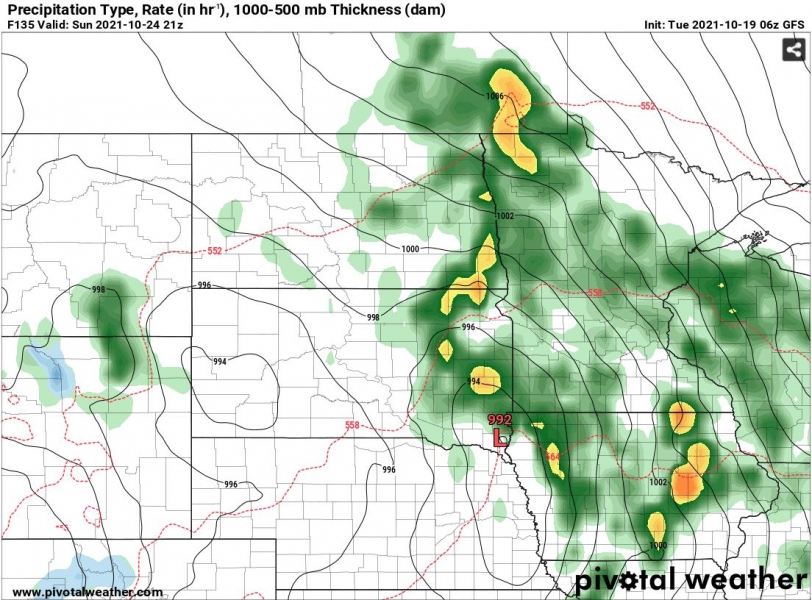