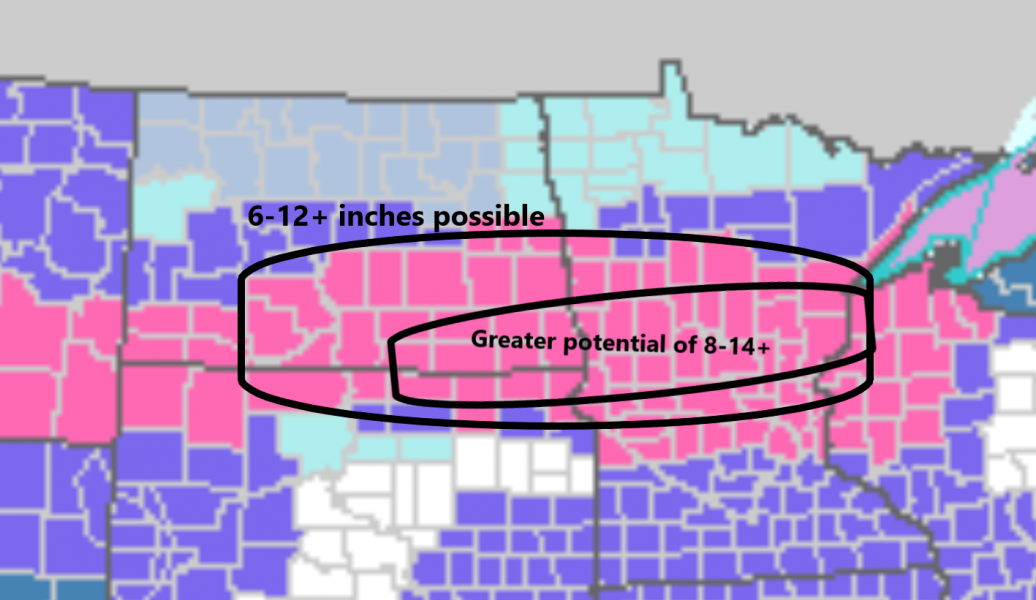 A winter storm warning has been issued from midnight tonight, 12:00 AM Monday until 12:00 PM Tuesday. This will bring impactful weather to the area with reduced visibility from blowing and falling snow, heavy at times). Near blizzard conditions are also going to be possible from time to time. Total snow amounts along southern North Dakota, northern South Dakota, and into lakes country Minnesota could see close to 12 inches of snow or more by Tuesday morning. This could stretch through Tuesday night as another round of snow works its way from the southwest. This second round of potentially measurable snow looks to hit south in South Dakota and over into Minnesota, but we are keeping our eye on it in case of a more northward shift.

Tonight a winter storm warning goes into effect. Snow showers will develop and track from the west southwest after dark. Temperatures will dip down close to 0 degrees, with the wind out of the north 15-30 mph. Wind chills will be in the 20-40 below zero range. Snow showers continue through Monday, heavy at times making traveling and the morning/evening commute difficult with reduced visibility from falling and blowing/drifting snow. Wind will be from the north 15-30 mph and gusty at times. Temperatures will be near 0 and slowly but gradually falling through the day with wind chills 20-40 below. It will only take about 10 minutes for frostbite to set in at -30. If you find yourself in a situation where you are stuck on the side of the road, remember to call for help vs. seeking it out. Plan on slippery roads, partially or completely snow-covered roads with blizzard-like conditions possible from time to time from falling and blowing/drifting snow.

Overnight breezy conditions will continue, and snow showers will begin to lighten up and diminish through the overnight hours into Tuesday morning. However, as mentioned above more snow may be possible Tuesday afternoon into Tuesday night as another burst of snow enters the area from the southwest. This looks to ride just south of us and only clipping the far southeastern portion of North Dakota, but it is close enough to home to worry about as it will bring the potential for several more inches of snow across South Dakota into central Minnesota. So I am keeping a close eye on that for any signs of a more northward track.

By Tuesday morning we will be looking at a band of 6-12+ inches of snow through southern North Dakota, Northern South Dakota, and over into Lakes Country Minnesota. Attached below are a few models on expected snowfall by noon Tuesday. Keep in mind these are just a couple of possible outcomes. This system is still evolving. Placement of the heaviest snow may slightly shift and exact snow totals. But 6-9 inches looks likely in the F/M area with lesser amounts north, and higher amounts just south and into Lakes country. By Wednesday areas of central Minnesota could see 12-20 inches of snow after the second round of snow.