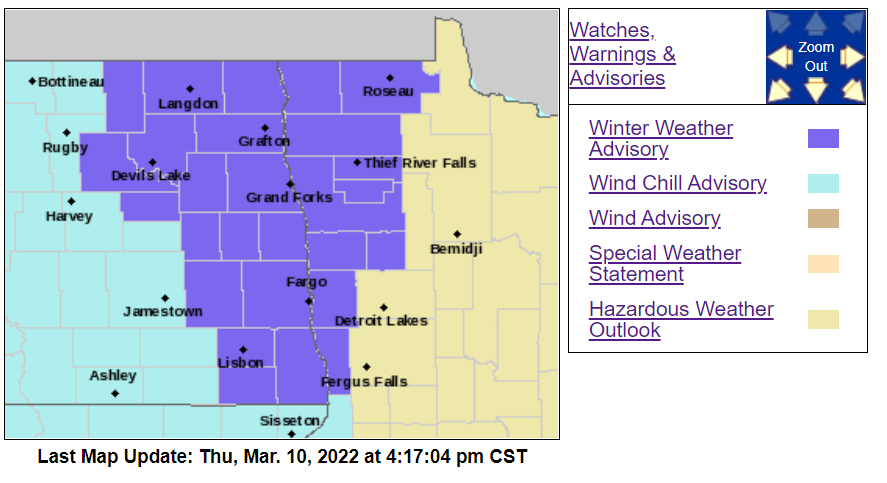 Another clipper system will bring some impacting weather to the area this evening into Friday with strong wind gusts, scattered snow showers/squalls, and areas of near-blizzard conditions possible from time to time from blowing snow.

This evening a strong cold front will push across the area from the northwest. Timing will carry from location to location but will begin first around the Devils Lake Basin between 3:00 and 5:00 PM CDT. The cold front will work its way to the southeast into the Fargo area by about 7-8:00 PM and then into Lake's Country after 9:00 PM. Strong wind from the SW today between 15-30 mph will turn to the northwest and gust into the low 40s at times. Along the cold front, scattered snow showers will develop and potential for snow squalls.

What is a snow squall? Well, it's basically a convective band of snow, similar to a thunderstorm but not quite as strong and snow vs. rain. These bands can pack quite a punch through, with localized rapidly deteriorating visibility to near zero. If a larger snow squall forms, then you may receive a warning on your phone or mobile device, similar to a severe thunderstorm just to let you know, as a precaution. Check out the image attached below. The NWS of Grand Forks put together a great graphic explaining snow squalls.

So this evening/tonight, strong winds with scattered snow showers and or squalls will bring a light dusting of snow to the area, generally a half-inch or less with localized areas able to see about an inch of snow where squalls set up. Patchy blowing snow is expected, with near blizzard conditions possible from time to time. Blizzard conditions are not out of the question, but that would be most likely in the northern valley and Devils Lake Basin (30-40%), where more fresh snow is on the ground to blow around. Expect some blowing snow in the southern valley as areas have recently picked up a light dusting up to an inch of new snow over the last couple of days. The worst conditions will be seen this evening towards midnight, and between 4:00 AM Friday morning until noon.

The winter weather advisory is from 6:00 PM until 4:00 PM Friday in the northern valley near Grand Forks. If you have travel plans this evening, be prepared for a reduction in visibility, sometimes under a half-mile, and strong winds producing some blowing snow and drifting snow. Roads may also become slick and or icy. Friday's morning commute and afternoon may also be difficult and or icy.

Friday remains cold with highs in the low to mid-single digits with strong NW winds between 15-30 mph with patchy blowing snow, especially in the morning. Dangerous wind chills will return overnight Friday as temperatures drop to near -10. But the good news is that warmer weather is on the way. The weekend remains breezy, windy for Saturday, with temperatures in the 20's rising to near 30 Saturday night. Less wind but still breezy on Sunday, a high near 30 with a slight chance for some snow overnight into early Monday morning. Not a big deal with that, but it could bring a couple of inches of snow to the area. Next week we get a glimpse of spring with highs in the 30s to mid 40's! 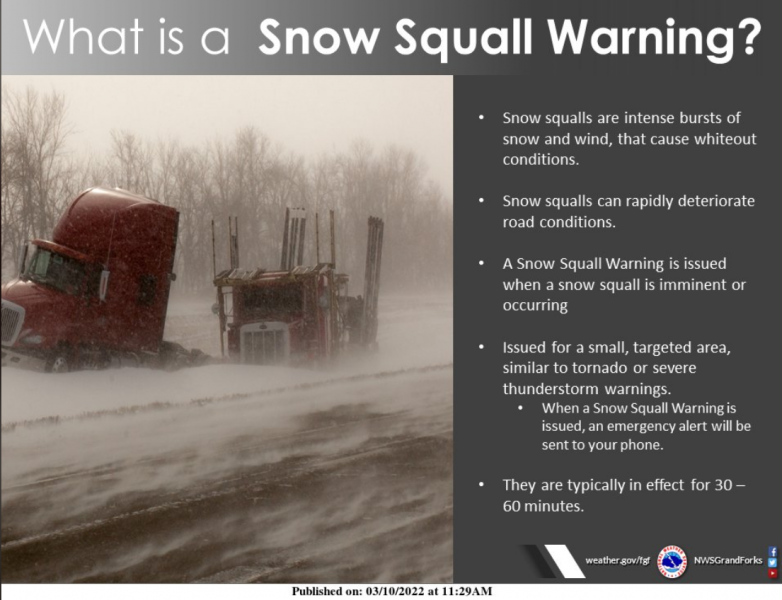 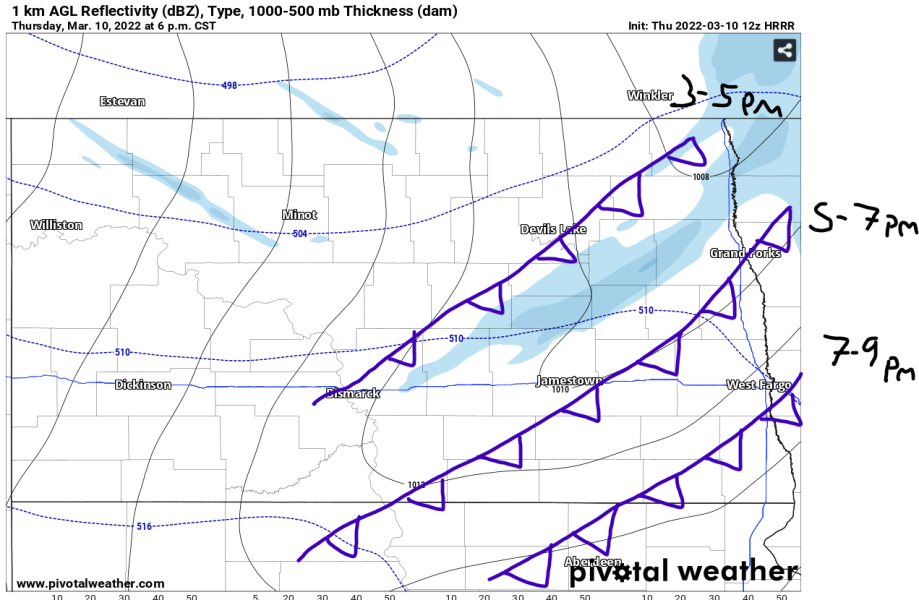