Record Heat But Cooler Temps On The Way 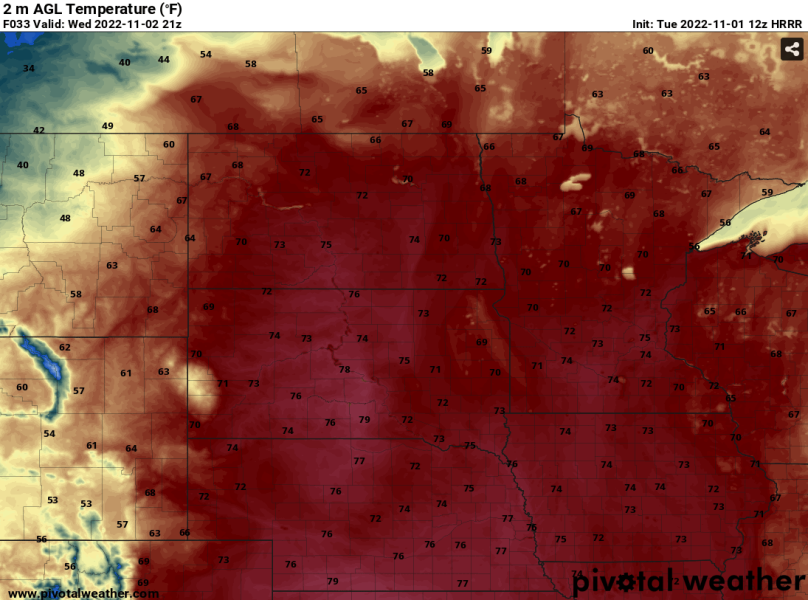 A record set in 1978 here in Fargo is in jeopardy for Wednesday 11/2/2022. In fact record temperatures are expected throughout the portions of the Dakotas into the central US. The record high in Fargo is 73, and temperatures will come close to tie it. Assuming we see more sun then expected that record could be broken. Im calling for partly cloudy skies but increasing clouds through the day with a stiff south wind between 15-30 mph and gusting higher at times. Wednesday will likely be our last 70 degree day as chillier air will flood in to end our week and into next week. Through the remainder of the first week of November temperatures will slide down into the 40s with a few lower 50's. The only chance for some showers and even a couple snow showers comes later into the day Thursday into Friday morning as two waves of energy dance around Fargo, heading just south, north, and east of the F/M area but a few showers will remain possible.

Colder weather continues into next week as I suspect more Canadian air to fall down behind a possible storm system Monday into Tuesday. The track of this systems still remains pretty uncertain and outcomes even more uncertain. But if it continues on its current expected track, some rain and then snow showers, even measurable snow looks possible although targeting more into western North Dakota for measurable snow. Keep it tuned to WDAY and WZFG for the latest on the weather.