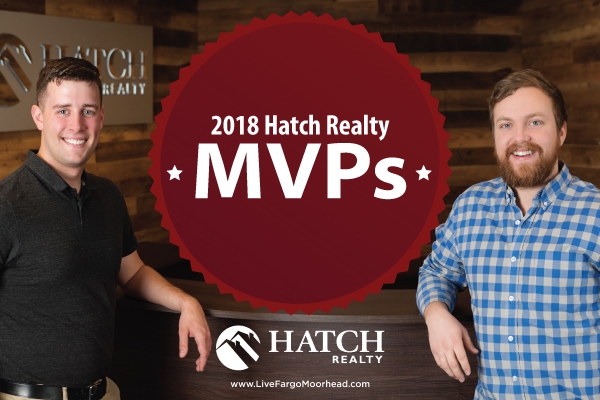 As another year approaches its end, Hatch Realty reflects on the past 11-plus months of data, numbers, client events and team building that 2018 had to offer. Each year at the company’s December holiday party, Erik Hatch, founder and CEO, takes time to recognize the past year’s top performers. The awards presented are based on and given in two areas: 1.  Numbers/data-driven;  and 2.  Team voted. Of these awards, the highest honor, known as the Hatch Champion (or MVP), is a team-voted award recognizing the team member proven most valuable in their ability to lead by example and exemplify the company’s core values over the course of 2018.

This year, the Hatch Champion award was presented to two team members who received an equal number of votes from the Hatch team: Tyler Heins and Cody Meyer.

“I am incredibly proud of everything these two have achieved over the past year,” says Erik Hatch. “The amount of growth they have shown in their personal and professional lives has been inspiring to watch, and they couldn’t be more deserving of this award.”

This award (chosen by Hatch Realty’s leadership) is given to the individual that has shown extreme involvement and value in giving to the betterment of his/her peers, family, friends, team members and community.

This team member voted award recognizes a member of the Hatch Administrator team who shown commitment to the caretaking of Hatch Realty’s office, daily operations and morale within their team and those they surround.

This award recognizes an individual of the Hatch Team (traditionally with veteran status) who has provided to the system and structure that allow the company to become more efficient and better serve their clients; a “legacy” has been left behind by each and every team member who has received this award.