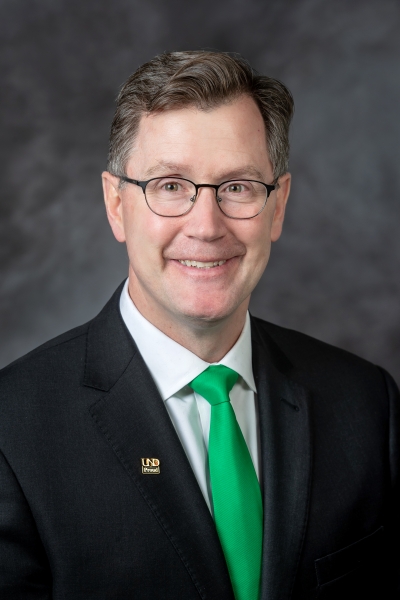 Photo by: University of North Dakota

(Grand Forks, ND) -- The University of North Dakota has ceased work on a controversial draft of a new gender inclusion policy on campus.

The move was announced via a statement from school President Andy Armacost following discussions on the complexities of the matter and the varying feedback he has received with UND student leaders and the UND Student Senate, as well as several other valued sources with input on the matter.

At a meeting Wednesday, the UND Student Senate passed a resolution supporting continued development of UND’s draft policy. Then, Thursday night, President Armacost personally informed members of the campus LGBTQ+ community about his decision to cease work on the draft policy. The President also communicated, in advance, with Christopher Dodson, director of the North Dakota Catholic Conference, to alert him of UND’s intention to cease work on the draft policy.

Communications also have been sent as of Friday morning to the North Dakota University System Chancellor and members of the State Board of Higher Education, other NDUS presidents, State Legislators, and Alumni leaders at UND.

You can read President Armacost's full statement on the issue below.

Full Statement on the halting of UND's Gender Inclusion Policy:

The recent public discussion about a draft gender inclusion policy at the University of North Dakota highlighted concerns both about freedom of speech and religious exercise and expression and about protections for transgender students, faculty, and staff members. At last Friday’s press conference (January 14, 2022), we addressed these concerns as well as the intent of the policy.

The campus-wide committee that drafted this policy identified relevant laws and state policies and assembled them into a single, accessible document that highlights protections already in place. Further, the committee’s intent was to bring a sense of humanity to a highly marginalized group.

The draft policy included guidance about the use of preferred pronouns on campus for students, faculty, and staff. Uncertainty existed about the consequence of not following this guidance and the impact on freedom of speech and religious exercise and expression.

UND has a strong track record of free speech protections with a “green light” rating by the non-partisan Foundation for Individual Rights in Education (FIRE). Our campus policies recognize the importance of promoting speech as a conduit for ideas and providing ample space and encouragement for the expression of a broad diversity of viewpoints on topics where members of campus may have passionate and principled disagreements. Limiting speech cannot be the answer as we face challenging issues.

However, when speech becomes the source of discrimination or harassment, existing UND policies offer protections to all members of our campus, including in the areas of gender identity and sexual orientation. These protections, with well-defined thresholds, are consistent with federal and state law, and they guarantee access to education and employment for each member of our campus community.

As a result of the recent discussions and because existing policies already provide equal opportunity protections to all of our campus members, UND will cease its work on this draft policy and will not implement it.

This decision should not signal a lessening of the support we show to each and every member of our campus community. At UND, the expectation is that all of us treat one another with respect and dignity in each of our personal interactions.

What’s next? The conversations over the last week illustrate the importance of our strong and enduring commitment to free speech, the free exchange of ideas, and a civil dialogue, which are central to the mission of our university. This illustrates my vision for a campus where we come together to address our differences rather than driving each other apart.