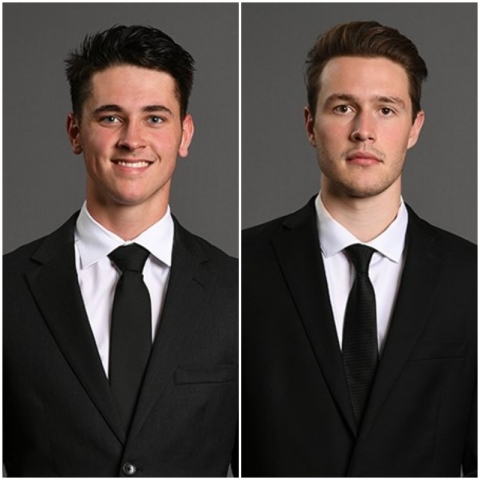 Three teams are represented among the Bauer National Collegiate Hockey Conference (NCHC) Players of the Week for the week of Jan. 27 through Feb. 2, 2020, Among them are the University of North Dakota. North Dakota junior Peter Thome for Goaltender of the Week and UND forward Shane Pinto for Rookie of the Week.

In his first time starting both games of a weekend series this season, Thome was rock solid, allowing only one goal all weekend while backstopping North Dakota to a sweep of Colorado College. They were only his third and fourth starts of the season, as well.

In Friday’s opener in Grand Forks, Thome was stellar, stopping all 25 shots he faced, which was needed in a narrow, 1-0 victory over the Tigers. The Columbus Blue Jackets prospect made 12 saves in the second period when the game was still scoreless, and stopped four shots short-handed to help kill all three CC power plays. He earned Second Star of the Game for his first shutout of the season and second of his career. A night later, Thome made 14 more saves in an 8-1 rout, including three more short-handed saves to help kill off all five Tiger man advantages.

Thome finished the series with 39 saves on 40 shots for a .975 save percentage and a 0.50 goals-against average to go with his two wins and shutout. Of his 39 saves, seven were short-handed to help UND go a perfect 8-for-8 on the penalty kill. Thome is now 4-0-1 on the season with a 1.35 GAA and a .928 save percentage in six games played.

Pinto popped in a pair of goals to help power North Dakota to a home sweep of Colorado College, with one each night. In Friday’s opener, he scored the only goal of the game midway through the third period on the power play to break a scoreless deadlock in a 1-0 victory. He earned First Star of the Game for his game-winning goal and fired six shots on goal.

A night later, Pinto scored another goal, finishing off UND’s 8-1 beatdown of CC by scoring the Fighting Hawks’ eighth and final goal in the third period. The Ottawa Senators prospect put four shots on target Saturday and was +1.

Pinto finished the series with two goals, 10 shots on goal, a +1 plus/minus and three blocked shots. He also won 65.7 percent of his draws against Colorado College, going 23-12 in the center circle. In 25 games this season, Pinto is second on the team with 13 goals and fifth with 22 points.