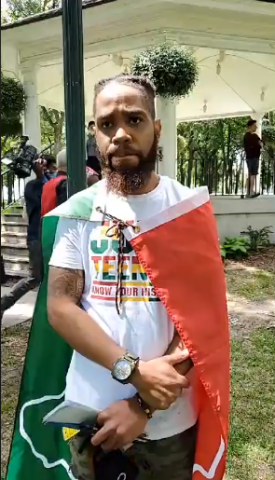 A group of residents gathered for a march commemorating Juneteenth, on Friday. Those in attendance began by participating in a short program, before taking to the streets, eventually reaching Fargo’s City Hall, before returning back to Island Park for the remaining portion of the event. The event coincided with Juneteenth, which is a holiday celebrating the liberation of those who had been held as slaves in the United States.

“Today was peaceful, impactful and inspirational,” Wess Philome tells WZFG Radio’s Steve Hallstrom. “It continues to go against the narrative being painted not just locally, but nationally.”

Prior to Friday’s event, Moorhead Mayor Johnathan Judd and Fargo Mayor Tim Mahoney jointly signed a proclamation recognizing today as “Juneteenth 2020.” Mahoney delivered the proclamation to organizers of today’s march at the beginning of the event.

Philome says today’s proclamation “was not enough to stem the tide.”

“If the mayor had been an ally all week,” he says. “Then this would have been so impactful.”

In the days leading up to the event, Mahoney issued an emergency declaration in relation to the event, which Philome says he believes limited the size of the event.

“It instilled fear in the community when he cites possible guns being involved,” he says. “That feeds into the narrative of rioting and looting.”

Philome encouraged the crowd to “keep the dialogue going,” saying if called on to go to Sanford or Essentia, he wants people to remain involved.

He says the businesses, not just the people going to them, are responsible to speak up for them and be their voice.

Philome calls May 30 a learning day “for the entire city.”

“No one could have predicted that three to five thousand people would come together,” he said. “Everyone came together, but we didn’t necessarily have a mission, one voice or full unity. That’s why we saw what we saw.”

Since then, Philome says his group has had a plan, successfully organizing several events since then. He says as long as his name is on an event, there will be no riots in downtown Fargo.

“I can’t speak for everyone or every gathering,” he says. “But if my name or face is on it, you will not see any looting or rioting.”

He says the group will continue to involve Fargo Police Department in every gathering, along with the group providing a security team.

“We will do everything in our power to make sure that the community of Fargo is not impacted by our protest in a negative way,” Philome says. “Only in a positive way by creating change.”