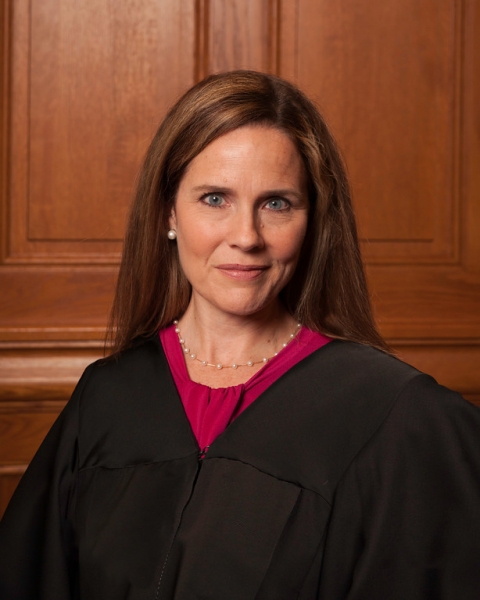 “Justice Amy Coney Barrett is a reminder to millions of Americans why they voted for President Trump in the first place. She is now the third solid, conservative Justice appointed to the Supreme Court by the President and she will apply the Constitution and not turn the Court into a super legislature. Her nomination and confirmation exposed the radical leftist plan to pack the Court by expanding its size, and also put Joe Biden on the spot. He must now come clean with the American people, reveal his list of prospective Justices, explain his position on court packing, and stop telling voters that they ‘don’t deserve’ to know what he thinks,” Jenna Ellis, Trump 2020 Legal Advisor, said in a press release.

North Dakota Senator Kevin Cramer outlined his support for Justice Barrett’s nomination in remarks on the Senate floor this weekend after announcing last Thursday he will vote to confirm her.

When she was nominated, Senator Cramer applauded President Trump for selecting Justice Barrett and called on the Senate to take up her nomination this year. The senator met with Justice Barrett on Capitol Hill earlier this month.

“Today, we did the job we were sent here to do. Congratulations to Justice Barrett on being confirmed and to Leader McConnell and Chairman Graham for successfully shepherding her nomination through the Senate. History will look back on today as the day we confirmed one of the most impressive judicial nominees we’ve seen in a generation. She is a brilliant, virtuous jurist who is ready to serve our country on the nation’s highest court. I am honored to have cast my vote to confirm her," Cramer said in a statement earlier this evening.

North Dakota Senator John Hoeven also issued a statement, saying, “As both a law professor and a judge, Justice Barrett has shown a deep respect for the Constitution and a commitment to upholding the law rather than trying to legislate from the bench. During the confirmation process, she made it clear that she will be impartial and fair, and that she understands the proper role of a judge. Justice Barrett has the right judicial philosophy for North Dakota and our nation, and we congratulate her on her confirmation to serve as a Justice on the United States Supreme Court.”

Michelle Fischbach, the Trump-endorsed candidate for Minnesota's Seventh Congressional District, released the following statement regarding the confirmation of Amy Coney Barrett to the U.S. Supreme Court:

"Congratulations to our nation's newest Supreme Court Justice Amy Coney Barrett! Barrett is a well-respected judge, professor, and mother of seven and will be an incredible addition to the highest court of the land. I applaud President Donald Trump and the U.S. Senate for filling this seat and ensuring that the U.S. Supreme Court remains fully represented."

“Tonight we celebrate the confirmation of Judge Barrett, a superb jurist who will interpret the Constitution as it is written and not what she wishes it to be, which is of particular importance when it comes to ensuring the Court does not go along with Constitutionally illiterate radicals like Senator Tina Smith who wants to severely restrict Minnesotans’ Second Amendment right to defend their families.

“Tina Smith voted no on Barrett because she likely won’t rule the way Tina Smith wishes she would. Smith seems to misunderstand the role of the Supreme Court—she believes it should make laws whereas Congressman Lewis believes judges must apply law as written by legislators. But, coming from somebody who won’t rule out packing the Court, it’s clear Tina Smith has no regard for the separation of powers or the judicial branch.”