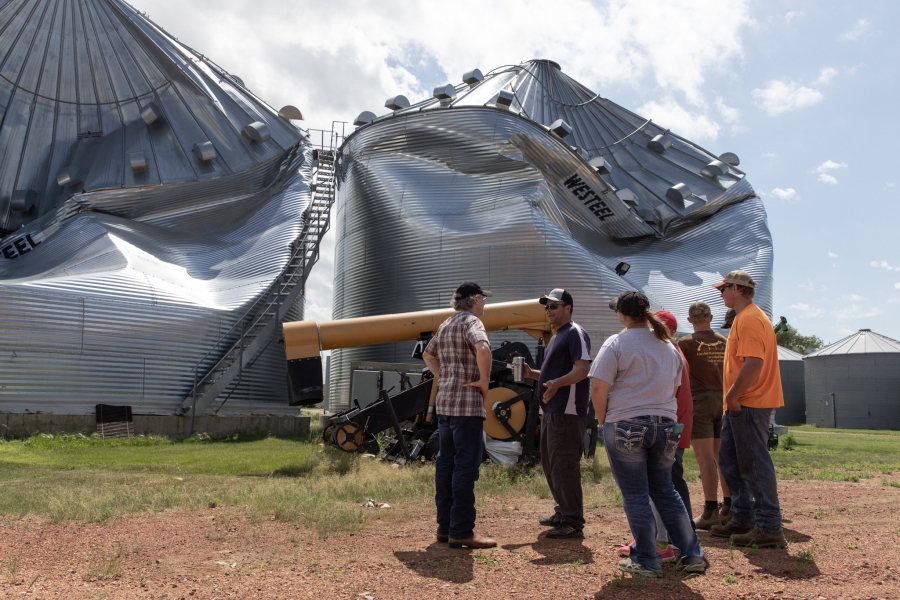 Garrett Swindler and his family speak with Gov. Doug Burgum about the extensive damage sustained by their grain bins in Mott, N.D., when an EF-1 tornado struck the city on Friday, July 12, 2019.

Gov. Doug Burgum surveyed damage from Friday night’s tornado in the city of Mott, commending local leaders and the community for their preparation and response to the tornado, which caused significant damage but no injuries or deaths.

Homeowners shared their experiences of taking shelter in their basements as the storm ripped garages apart, tore roofs off and crumpled steel grain bins like discarded paper cups.

“Whenever you’ve got a storm of this size, you’re going to see damage, but the thing that really shines here in Mott is the resiliency of the families, the community, the neighboring communities that came together in the aftermath of the storm. This was picture-perfect preparation ahead of time and emergency response activity,” Burgum said. “For this amount of storm damage … and not a single injury or fatality, it’s just a credit to everybody that was so responsive when they saw the storm coming.”

An EF-1 tornado with wind speeds of up to 105 mph touched down north of Mott at 9:24 p.m. Friday, cutting a path about 2.8 miles long and stretching up to 200 yards wide, according to National Weather Service estimates. The twister flung debris into homes and peeled off roofing, flipped over campers and leveled the 4-H building at the Hettinger County Fairgrounds, with over 400 exhibits inside for the Hettinger County Fair. Authorities also reported downed power lines and branches, uprooted trees and damaged crops.

Warning sirens were sounded at 9 p.m., and sheriff’s deputies went door to door warning people to take cover. One of those was Marge Everhart, who could see the funnel cloud before riding out the storm in her basement with her dog and cat. The tornado lifted her detached garage from its foundation, flinging it into her house and scattering debris across her farmyard toward the city.

“When I stepped outside, it was kind of overwhelming,” she said, adding that 11 volunteers showed up the next morning to help with cleanup. “Small community – you can’t beat it.”

About 50 people took shelter at the county courthouse, and roughly 300 to 400 people at the fairgrounds were evacuated before the tornado, officials said.

The North Dakota Highway Patrol and North Dakota Department of Transportation both assisted with traffic control and cleanup after the storm. Burgum was also told today that people at the fairgrounds couldn’t hear the tornado sirens in town, and he said the state will work with the city to extend siren coverage. The North Dakota Department of Emergency Services has a grant program that communities can access for siren and shelter projects to build resiliency.

“There’s more work we can do,” Burgum said, again expressing his gratitude for the preparedness and response by local officials and the outpouring of support from the surrounding area. “One of the things that makes North Dakota great is during a time of crisis, the neighbors come together to help each other out.”