Everyone Was Forecasting Storms! Why Didn't They Happen? 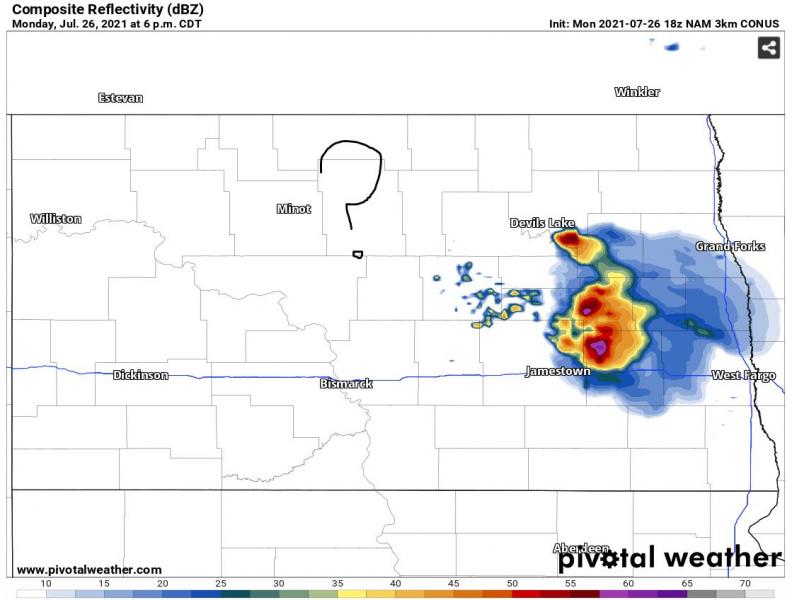 Taking a look back on the other day (Monday, 7/26/2021), it seems as if every news station in the area was forecasting thunderstorms with the potential for severe thunderstorms. Even the storm prediction center had issued a slight risk for severe weather and a severe thunderstorm watch in effect for southeastern North Dakota. But what actually played out was a different story. Two small thunderstorms developed to the west of Jamestown ND and quickly dissipated before they even reached the city... only reaching "severe" criteria very briefly. So what played out on this day for the things not going exactly as thought by so many meteorologists?

Let's take a look at our larger-scale set up on this day. Sometimes describing technical meteorological terms can be confusing so I will try and keep it as simple as I can. On the morning of Monday, a weak surface low set up over SE North Dakota and was forecasted to track into ND while a weak but evident warm front would push into eastern ND and western MN, this was to be our forcing mechanism along with a small and weak upper-level disturbance. You may ask what is a forcing mechanism? More or less we need something that can push or lift air upward so it can freely rise by its self in an unstable environment... this is what we refer to as a "forcing mech". Going into the afternoon temperatures were forecasted into the mid 90's and dew points were to be in the mid to upper 60's across eastern ND. This in return would provide a lot of instability within the atmosphere where CAPE values or (the convective available potential energy) were observed between 2000-4000 J/kg from the surface. That amount of CAPE would be more than enough to get some strong storms going quickly. In addition to upper-level winds and moderate/strong low-level lapse rates, the main concern was very large hail, along with damaging winds and even an isolated tornado or two. (One tornado was confirmed by law enforcement near red lake MN) However, in North Dakota, we had a couple of things we needed to keep a very close eye on going into the late afternoon...

I had mentioned on WDAY midday a few times that if temperatures didn't get into the mid 90's the chance for thunderstorms would go down. Throughout the afternoon upper-level haze blocked enough sun to keep us a few degrees below our convective temperature (hence why we didn't see really any clouds in the sky... you need little clouds to turn into bigger clouds.) With lower surface temperatures we developed a cap across the region. A cap is where temperatures aloft are warmer than at the surface or warmer than the temperature of a theoretical air parcel raising into the atmosphere. So in return as some storms tried to develop to our west they quickly fell back down simply because they were colder than the air above them and being denser. Like I said earlier above two storms were able to break that cap along a dry-line west of Jamestown but eventually lost their updraft supporting them and dissipated quickly.

There was one area where the atmosphere was not capped that we were keeping an eye on and that was located to the south of Devils Lake. There was a very small cloud field trying to develop but at that time our forcing in the area was so weak it was unable to push any of that air up to the point where it would freely convect and produce thunderstorms, the area eventually began to cool into the evening only strengthening the cap and reducing our chances for storms to almost zero going through the late evening.

In summary, had we been just a few degrees warmer into the afternoon and had more of a...or stronger forcing in the area we could have been looking at some pretty bumpy weather going through the late afternoon and early evening hours across North Dakota on Monday 7/26/21. Had storms been able to develop which a lot of uncertainty existed if and where they would, the environment would have supported some very strong storms, hence why we were under a slight risk for severe weather along with our severe thunderstorm watch yesterday evening.