One More Nice Day Then The Bottom Falls Out. End Of Week Snow? 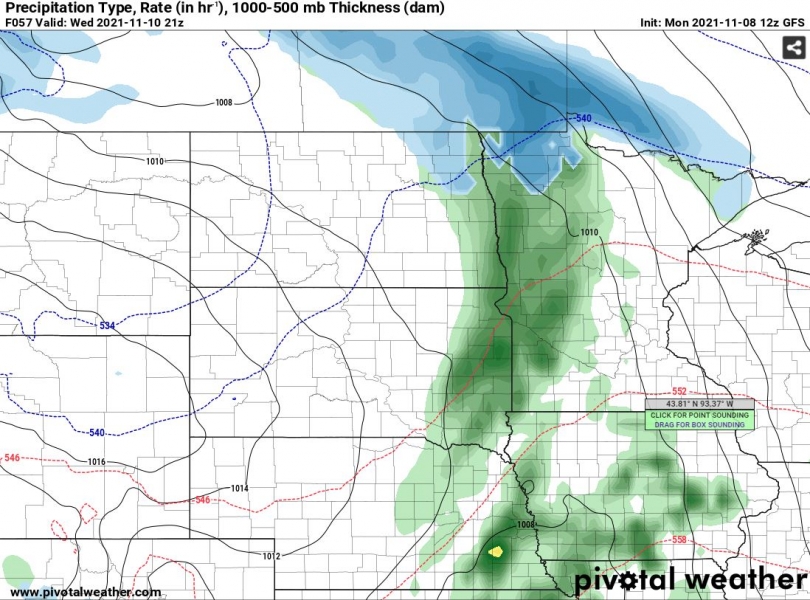 We have one more nice day before things start to feel more like November. As low pressure developing off the Rockies lifts into Minnesota towards the end of this week, we may see our first measurable snow. Thus, Tuesday will be the pick day of the week and possibly the warmest day for the remainder of 2021. It does look like we might be able to briefly "warm-up" for a day or two in the middle of next week, but that's just a maybe right now. Regardless, it would still likely be chilly.

Tuesday will bring us mostly sunny skies with light winds around 5-10 mph from the southeast with a high near 55 degrees. Clouds then roll in overnight into Wednesday as low pressure lifts into Minnesota. Rain will first enter the area for half of the day on Wednesday. While temperatures drop into the mid 40's with southernly winds between 10-25 mph, then even colder as highs stick in the 30's through the rest of the week. We will get a break in the precipitation Wednesday night into Thursday afternoon but will have a chance for snow Thursday afternoon into Friday, then again Saturday into Sunday.

Mid/end of the week

There is still a lot of uncertainty regarding the storm system entering our area Wednesday into Friday. As of now, it looks like low pressure will lift into Minnesota Wednesday, bringing rain to the F/M area through the afternoon. This low then intensifies over NE Minnesota and Lake Superior. As the system undergoes intensification, the winds will ramp up for Thursday into Friday, gusts upwards of 40-50 mph. As the storm system intensifies, it will retrograde back to the west a bit. This is where we see our chance for snow Thursday into Friday. This low then exits our area, and we turn our attention to a second system leaving Alberta to track through our area Saturday into Sunday; this will bring another chance for snow or a wintery mix.

There is still quite a bit of uncertainty within this large-scale system arriving in the middle to end of this week. The exact path and moisture content are among the greatest and in return, create the most uncertainty for the impacts for you. How far west will this system retrograde? The further west it retrogrades, or how far backwards it goes, would change the amount of snow to fall. The further west it goes would mean more snow. If it just sits over Lake Superior, then that would bring less snow. Models are still bouncing around but are slowly coming into more agreement of 1-3 inches of snow. Another uncertainty is the amount of moisture. When this system enters Minnesota, it looks like drier air from a second system from Alberta gets wrapped up in the storm system. This would greatly impact the amount of snow we could get depending on how much dry air is pulled in.

Could there be less or more snow?

Of course there could. With a system as dynamic as this one, it is still uncertain how much snow we will receive. The further the system retrogrades west is where we would see high amounts of snow. If it doesn't retrograde as much as we think it will, or not at all, then we would see less to none.

What do we know for sure?

Rain will enter our area Wednesday, then cold weather will finally funnel into the area at the end of this week behind the storm system bringing in windy conditions with highs in 30's which will stretch into next week with a chance for a mild "warm-up" in the middle of next week. Also, for another chance of snow or wintery mix Saturday into Sunday.