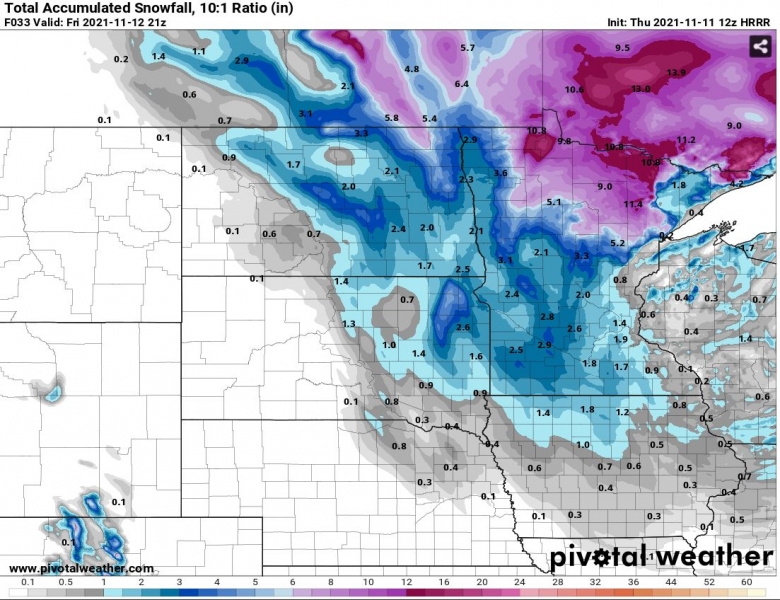 We all knew it was coming, and our first measurable snow is just around the corner. It's not a drastic amount of snow, but the winds will be the main culprit to the impact on your traveling plans, which may bring blizzard-like conditions tonight into Friday morning. We start today dry and cloudy with winds picking up through the day 20-40 mph, but that all changes as we head through the later afternoon. As low pressure to our east intensifies, the winds increase with gusts upwards of 50 mph this evening into Friday morning, and snow will funnel down from Canada north to south. This will all begin as a rain/snow mix, then entirely turn over to snow this evening. Snow last overnight into Friday morning then comes to an end by the late morning. Winter Weather Advisories go into effect at 6:00 PM this evening and stretches into Friday morning. The advisory is for 1-3 inches of snow, blowing snow, and reduced visibility due to 50 mph gusts. I do suspect that we will get closer to 2 inches of snow in Fargo. 2-4 inches around Grand Forks and higher amounts north and northern MN, say from Crookston to Bemidji and north towards Lake of the Woods.

When does the snow start?

Later this afternoon/evening around 5:00 PM  here in the Fargo, Moorhead area, give or take an hour. However, it may be possible we see this develop a bit earlier in the afternoon. In the northern valley around the Grand Forks area, the snow/wintery mix starts earlier in the afternoon. This begins as a wintery mix, then fully snow as temperatures drop below freezing later this afternoon/evening.

What will it look like, and how will this affect traveling and my commute?

The evening commute home should be fine. You may run into some slippery roads and some reduced visibility if you are traveling up into the northern valley after dark, though. Winds will be pushing the snow around, which may bring near-blizzard conditions, mostly overnight into early Friday morning. Roads will be fine for the first couple of hours, but road conditions will deteriorate after dark as temperatures drop below freezing. Especially with the blowing snow, roads will get slippery and icy. Even if the roads are not icy yet, the bridges and overpasses will freeze first before the other roadways!

The Friday morning commute may have issues, especially if your driving distance. Perhaps just a day to work from home if you can. Expect blowing snow, slippery roads, and reduced visibility.

How much snow will I see?

Here in the F/M area about 1-3 inches of snow. I'm forecasting right around 2 inches of snow in Fargo. Higher amounts to the north and east. Check out the map attached for expected snowfall. This is just 1 model for anticipated snowfall in the area, but I do agree with the amount of snow it's suggesting, again give or take an inch depending on how exactly snow bands set up.

Is there more snow after this?

We do turn our attention after this event to Saturday afternoon/evening as a clipper system slides SE through North Dakota. This doesn't look like a big deal right now but might be able to get another inch or so of snow out of this. 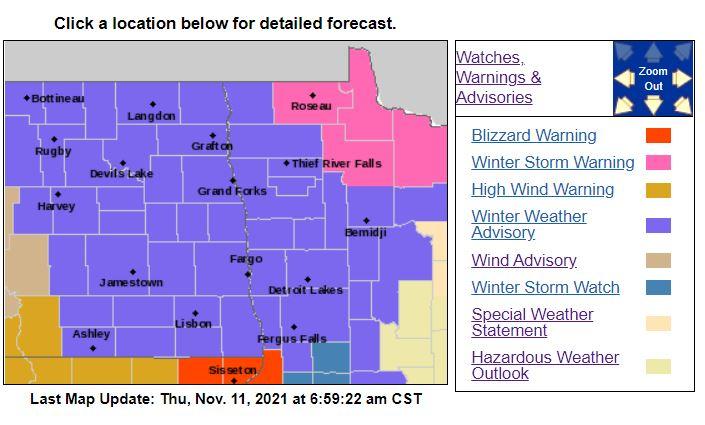