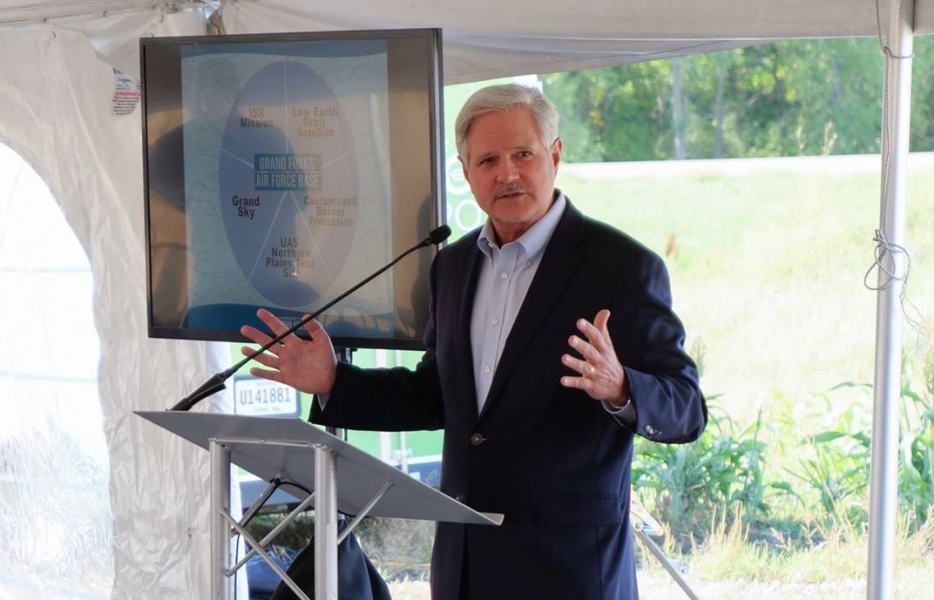 (Horace, ND) -- Lieutenant Governor Brent Sanford Thursday highlighted the state of North Dakota’s continued support for the development and commercialization of autonomous technology as he joined officials in announcing that Chicago-based robotics company Sabanto has donated a tractor utilizing its autonomous platform to the Grand Farm project near Fargo.

“This is a great day for North Dakota and one of the most exciting days in the brief but impressive history of Grand Farm,” Sanford said. “Today’s announcement by Sabanto marks the next major step in proving the Grand Farm concept of autonomous agriculture and commercializing this technology to enhance farm operations while helping to solve our workforce shortage. The state is strongly committed to supporting these efforts to foster innovation, grow and diversify our economy and keep North Dakota on the cutting edge of agriculture.”

This donation all a part of the Autonomous Nation Conference being held at Grand Farm in Horace.

"The success of our military depends not only on having the strongest force, but also on our ability to access the latest data and act upon it,” said North Dakota Senator John Hoeven. “That’s where North Dakota’s leadership in UAS comes in. We are partnering with the SDA on the next generation of communications technology and tying it into our unmanned missions to create an unprecedented level of autonomous capability that will support military operations across the globe. Further, this is just one way our state is leading in autonomous technology, and we continue working to leverage Grand Farm and our UAS ecosystem to realize the benefits of this technology in energy, agriculture and a wide variety of other sectors.”

The state has provided significant support for Grand Farm and the development of autonomous technology, as well as unmanned aerial systems through several agencies including the Department of Commerce, Department of Transportation and North Dakota Information Technology.