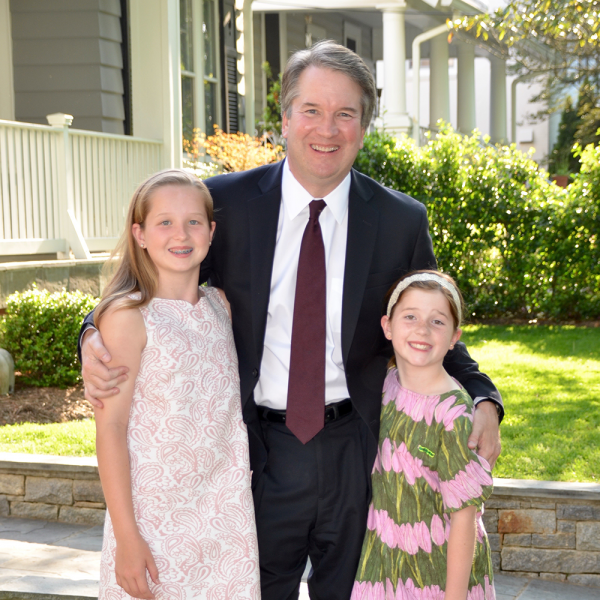 Judge Brett Kavanaugh and his daughters.

Judge Brett Kavanaugh is a brilliant Supreme Court nominee -- and that is exactly why the Democrats are preparing to oppose him at all costs.

The Democrat hostility toward Kavanaugh should come as no surprise to American voters. Ever since President Trump won the 2016 election, the Democrats adopted a familiar strategy of blind partisanship — blind to the needs of average Americans; partisan in opposing the White House agenda.

Senator Heidi Heitkamp of North Dakota recently met Judge Kavanaugh, promising to keep an open mind about the nominee and his legal positions. But with a tough reelection battle looming in November, it’s hard to tell if her intentions are genuine or merely political.

While some may have hoped for the return of the Democratic Party that truly valued political compromise, the Democrats’ current stance against President Trump suggests that its heritage has long been replaced by unhinged liberal extremism.

Senate Minority Leader Chuck Schumer exemplified the absurdity of his party last month when he complained that Republicans needed to release more documents from Kavanaugh’s unrelated work in the Bush administration.

Schumer doesn't care if his request has nothing at all to do with Kavanaugh’s legal thinking — the Democrats are only concerned with stalling the confirmation process in hopes of discrediting the nominee.

Clearly, the negative attacks against Kavanaugh lack substance since the nominee is by far the most qualified legal mind to replace Justice Anthony Kennedy in the country’s highest court.

Following his exemplary academic record as a student in Yale Law School, Kavanaugh began an outstanding career in law, serving as a clerk for Justice Kennedy and establishing himself as a prominent attorney.

Kavanaugh’s record as a judge also deserves substantial praise. On more than one occasion, Kavanaugh defended the rights of American laborers, arguing that “mere economic expediency does not authorize an employer to displace American workers for foreign workers.”

Similarly, Judge Kavanaugh has taken strong positions on protecting free speech, defending religious liberty, and safeguarding the Second Amendment. His court decisions demonstrate a responsible interpretation of our Constitution, but not political partisanship.

That’s why Brett Kavanaugh will make an exemplary Supreme Court Justice. Because he believes in the system our founders envisioned -- unwedded to political beliefs, but bound to duty to our Constitution.

Even his professional peers at the American Bar Association endorsed Kavanaugh’s qualifications when its standing committee on the judiciary evaluated him and delivered a unanimous rating of “well-qualified.”

When millions of Americans voted for President Trump, they did so in hope that he would replace retiring judges with legal scholars who believe in interpreting the Constitution based on its original meaning.

For the second time since his inauguration, President Trump has picked a Supreme Court nominee who demonstrates a deep understanding of the founding document and who will prove to be its stalwart defender.

Sadly, most Democrats will be far too obsessed with obstructing President Trump to give Kavanaugh a fair evaluation — and if they take control of Congress, their agenda will only become more partisan and punitive.

It is imperative that Democrats such as Senator Heitkamp follow through on their words of open-mindedness and vote for Kavanaugh’s confirmation.

America elected President Trump, in part, to pick the best candidates for the Supreme Court -- and he has delivered by nominating a qualified judge with an impeccable record. It’s now time for the Democrats to end their partisan game of blind opposition and acknowledge that Kavanaugh is the right man for the job.

Kayleigh McEnany is the national spokesperson for the Republican National Committee. She has a J.D. from Harvard Law School and BSFS from Georgetown School of Foreign Service. She also studied at Oxford University, St. Edmund Hall. Kayleigh is the author of the book "The New American Revolution: The Making of a Populist Movement."