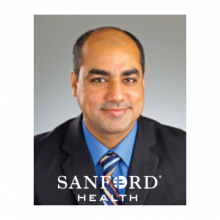 As the Coronavirus numbers in North Dakota continue to rise, so does the need for testing. One Sanford Health Infectious Disease physician says the Sanford Health system is in good shape--for now. But, should numbers rise astronomically, that could be a different story.
"I think we are in a very good place right now," Sanford Health Infectious Disease physician Avish Nagpal tells WZFG Radio's Scott Hennen. "We have a lot of testing capacity in-house here at Sanford."
But, he says, the numbers continue to climb.
"We do anticipate our case numbers to rise here," Nagpal says.
A lot is now known about the Coronavirus, allowing for physicians to be able to work with the virus itself. In the beginning, it was believed that the virus was transmitted on surfaces. But now, the knowledge by those studying the virus has changed that thought.
"We have discovered that it doesn't spread from surfaces as much," Nagpal says. "The majority of cases will occur from person-to-person contact."
People who are asymptomatic or presymptomatic can spread the virus, he says. But those who have had symptoms need to be taking care of it, before it spreads even further. The typical symptoms have to do with the respiratory system, although Nagpal says the CDC has added some other symptoms to the list of possbilities regarding the Coronavirus.
"We are encouraging everyone who has had symptoms, no matter how mild, to be tested," Nagpal says.
He says doctors are hoping for some type of antiviral or antiflammatory treatments within the next couple of months, while manufacturers of vaccines continue to work through trials. Nagpal says some candidates with vaccines are in phase two of three trials, with the goal of having something ready next year.
"Things are looking promising to have vaccines next year," Nagpal says.