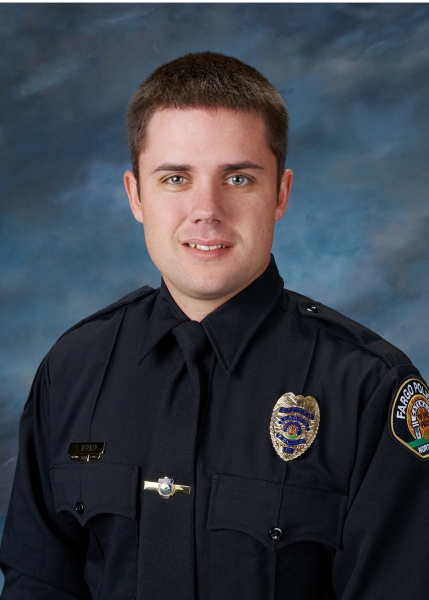 Officer Travis Berger grew up in Belle Plain MN where he graduated High School.  He then attended NDSU where he graduated with a Bachelor’s Degree and completed the local police Academy.  He began employment with the Fargo Police Department in October of 2012 where he served as a patrol officer until 2016 when he was named the departments training officer.

In February of 2019, Officer Berger became the departments recruiting and hiring facilitator. Through this role, Officer Berger focuses on creating positive relationships with potential candidates by creating individualized experiences to learn more about the candidate and their desire to work in law enforcement and likewise, allowing them to learn more about our department.

Officer Berger’s goal is to provide candidates with ample information so they can better make a decision about their future career path.  He has proven time and time again that his dedication to help good people get in to law enforcement is beneficial to both those considering law enforcement as a career and the communities in which they ultimately end up serving.  His commitment to those entering Law Enforcement is truly shown in the partnerships he has created at the local Colleges and Universities. Officer Berger regularly attends Criminal Justice Club meetings after hours and helps assist in upcoming events as a way to give back to the clubs and help provide a positive experience no matter what their interest levels are.

Officer Berger says the most rewarding part of being in this position is seeing the new recruit achieve their dream of being a police officer as they are being sworn in on their swearing in day, as this day is something they have been working towards for months, sometimes years.

Officer Berger has proved a tremendous resource for the Fargo Police Department because of his devotion to mentor applicants and new officers as they make decisions that will end up being, without a doubt, life changing.