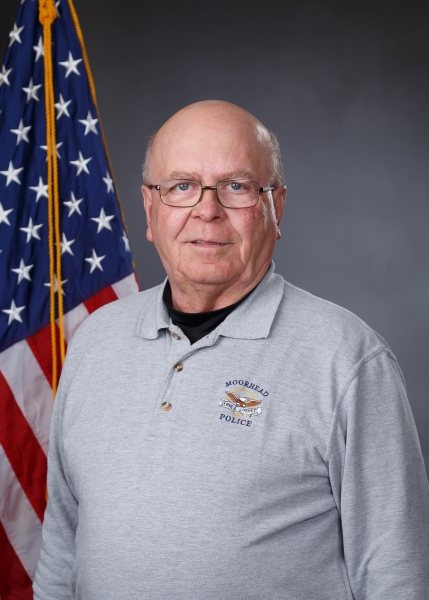 "Our family within the Moorhead Police Department consists of both sworn and non-sworn staff.  Our non-sworn staff is essential to our community and department.

Community Service Officer Kemper has been an exceptional example of how our family works together to provide vital services to our community.

CSO Kemper came to the Moorhead Police Department in 1999 with many years of law enforcement experience.  Before 1999, Steve was a part-time licensed Peace Officer with the Twin Valley, MN, Police Department.  During some of that time, Moorhead Officer Brian Dahl was the Chief of Police of Twin Valley.   Officer Dahl stated, “He was the best officer that community could ask from their police department.  I don’t think Steve ever slept.  He was always available and willing to help others and truly made a difference in Twin Valley.”  CSO Kemper continued that service to community members when he came to Moorhead.

His Moorhead Police Department supervisors describe him as always having a positive attitude.  He consistently demonstrated an outstanding work ethic and a strong commitment to the department, but more importantly, the community.  Steve played an exceptional role in maintaining our fleet of cars.  He had an unbelievable knowledge of each vehicle, knowing every repair that was made and everything that needed to be done.  Officers praised him for his work and his ability to get answers to questions and get tasks done sooner than expected.  He did this knowing he was helping others and never did it for self-praise.  He maintained a humble attitude and was a mentor to everyone on how to treat others with respect and how to enjoy your job, even when it wasn’t a good day.

Sadly, CSO Kemper retired on April 30, 2020.  His work with the department, although it will be carried on, will never be replaced.  He often dealt with angry citizens, having the experience of being sprayed by skunks several times, dealt with severe weather while trying to unlock a citizen’s car, and organized several police auctions.   He did all while still always maintaining a smile on his face.  If you asked Steve how his days were going, he would say, “I woke up on the right side of the grass, so it’s a good day.”  We thank Steve for his years of dedicated service and compassion for his community. On behalf of the men and women of the Moorhead Police Department, we all proudly nominate Community Service Office Steve Kemper for The Flag’s Salute to Law Enforcement."