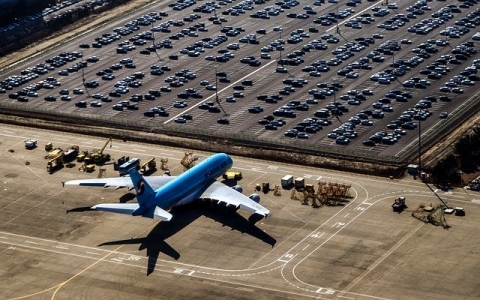 The airline industry has taken a hit due to COVID-19, and that includes airports locally.

The latest data from Airlines for America, a group representing major North American airlines, says that airports have seen a drop in on-board passengers per flight, both domestically and internationally. In early March, numbers were well over 100, while, as of early May, numbers are less than 40. Locally, airport leaders have seen the hit as well.

“It appears that this will be the norm for the next number of months,” he says.

Other data affirms the decrease. The Transportation Safety Administration, or TSA, says their screenings were down to 90,000 people per day earlier this month.

Major airlines are being affected, as well.

Allegiant Air, one of five major airlines that offer direct flights from Fargo, has drastically reduced its number flights, down to 1-2 flights per week to Mesa, Ariz. Mesa is one of five locations that Allegiant flies to regularly.

“It’s going to be a slow return to service,” he said.

Who Is Getting Your Vote In November?
2 hours 42 min ago
Talk Radio Town Hall with Senator Kevin Cramer
8 hours 24 min ago
Why is the ND Census so important? Kevin reminds us!
8 hours 34 min ago
Do you fully understand the repercussions of ND's Measure 3?
8 hours 41 min ago
Supt. Slette draws us a picture of the coming school year...
9 hours 42 min ago
Would a Biden-Harris presidential win spell disaster for the economy?
9 hours 47 min ago
Lawn and Garden tips from a pro!
10 hours 35 min ago
Election 2020: Find out how voting in Cass County will work!
10 hours 52 min ago
North Dakota delegation reacts to Trump Administration approval for use of Coronavirus funds for low-income rent assistance
August 13, 2020 - 1:13pm
Individual arrested for fleeing in a motor vehicle, other charges after Wednesday night pursuit
August 13, 2020 - 1:02pm