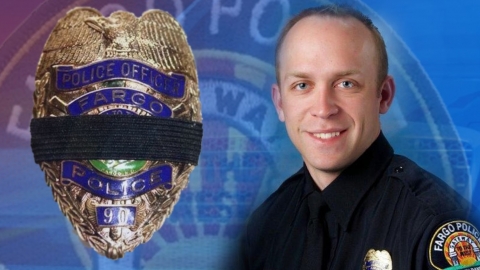 Luther Family Ford salutes fallen Fargo Police Officer Jason Moszer. End of Watch: Thursday, February 11, 2016. Jason David Moszer, 33, of Sabin, Minnesota, died Thursday, February 11, 2016, at Sanford Health following injuries suffered in the line of duty. He was born September 27, 1982, in Fargo, North Dakota, to Dave and Karen Moszer. Growing up in south Fargo, he attended and graduated from Fargo South High School in 2001. He served with the Minnesota Army National Guard as a combat medic for eight years until he was honorably discharged. He deployed to Bosnia from July 2003 to March 2004 and to Iraq from March 2006 to June 2007. In 2009, Jason graduated from North Dakota State University with a criminal justice degree and later attended Lake Region Law Enforcement Academy that year. He started with the Fargo Police Department in November 2009, where he protected, served, and gave the ultimate sacrifice. On June 15, 2013, he married Rachel, and became a wonderful step-father to Dillan and Jolee. Later that year they built their dream home in Sabin, Minnesota. Jason and Rachel were inseparable, and even shared the same birthday. Jason loved life and loved the time he got to spend with his friends and family. He enjoyed camping, motorcycling, cooking, shooting, hosting parties (sweatpants required), and just loving life. He always had a smile on his face and was never afraid to try something crazy. He also took great pleasure in the time he spent with his brothers in the Gunslingers Motorcycle Club. He is survived by his wife Rachel, step-children Dillan and Jolee, and Yorkshire Terrier, Scooter; parents Dave and Karen Moszer, Fargo; brother, Brian (Amy) Moszer, Sabin, sister Michelle Moszer, Fargo; grandparents Victor Moszer, Fargo, Margaret Kingren, Moorhead; father and mother-in-law, Mike (Deb) Beckett, Barnesville; sisters-in-law, Bobbi (Chris) Siegel, Morris; Aimee (Sean) Williams, St. Peter; nieces Ally Moszer, Karli Siegel, Madelyn Siegel, Lydia Williams, and Haylee Williams; nephews, Levi Moszer and Connor Siegel; and all of his brothers and sisters in blue. He was preceded in death by his grandparents, Gladys Moszer and Floyd Kingren, uncles, Dan Moszer and Richard Moszer, and cousin Brad Fettig. Jason’s wife would like to sincerely thank the communities of Fargo-Moorhead and Sabin for their outpouring of support during this difficult time. Also the physicians and nurses at Sanford Health for their compassionate care in making those last moments with Jason special. Thank you to LifeSource for assisting Jason to give in death as he gave in life through organ and tissue donation. "He came to work every day with a smile and loved working on the street," Chief David Todd told North Dakota's Valley News Live. "Law enforcement is a tight community. We're a brotherhood and a sisterhood, so it's like losing a brother. That's how it feels." Cass County Sheriff Paul Laney, “A chunk of our souls was taken today." Fargo Mayor Tim Mahoney said, “A tragedy affecting our men and women in uniform impacts our entire community. Today reminds us of the risks encountered daily by those proudly serving in uniform.” Luther Family Ford and Flag Family Media send their deepest condolences to Officer Moszer's family, friends, and the entire law enforcement community.