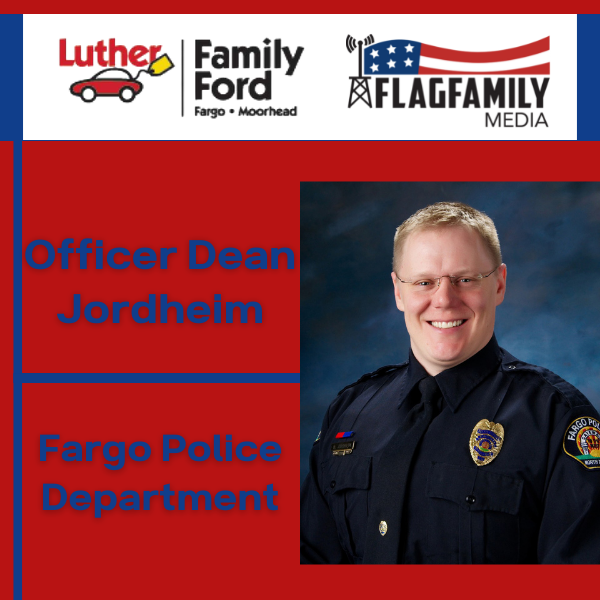 Officer Dean Jordheim started with the Fargo Police Department in 2008. Officer Jordheim began his career in patrol and expanded his expertise in numerous areas within the patrol division.

Officer Jordheim joined the department’s bicycle officer group and later graduated from Northwestern University’s Police Motorcycle Operator Course. As a certified motor officer, he transferred to the Traffic Safety Unit (TSU).
While as a member of the TSU, he would issue over 1,500 traffic tickets per year. Officer Jordheim became a subject matter expert in all areas of traffic enforcement and traffic safety.

Officer Dean Jordheim attended numerous advanced vehicle accident courses including becoming certified in crash reconstruction.
His expertise in traffic issues led him to become the department’s liaison to the central garage and coordinate the maintenance and repair of the department’s vehicle fleet.

His ability to work with different groups was evident during the Dakota Access Pipe Line (DAPL) protests in Morton County. Officer Jordheim was selected to be part of the multi-agency “Viper Team” which used snowmobiles and ATVs to patrol areas not accessible to wheeled vehicles.

Officer Jordheim’s skills are not limited to vehicles or traffic enforcement. He was selected to be a Police Training Officer where he has trained new officers.
His knowledge of the idiosyncrasies of the downtown area and his ability to cultivate relationships with business owners led to his being selected as a Downtown Resource Officer (DRO), which is his current position within the department!

In addition to his regular duties, Officer Jordheim is a backup bailiff for municipal court and an alternate Truck Regulatory Officer (TRO).
He represents the department at ceremonies as a member of the department’s Honor Guard.

Officer Jordheim is the recipient of the Emergency Service Unit Citation, the Commendable Service Award, a Certificate of Commendation, and two Life-Saving Awards.
He is a great asset to the Fargo Police Department and the citizens of Fargo!

We salute you Officer Dean Jordheim!