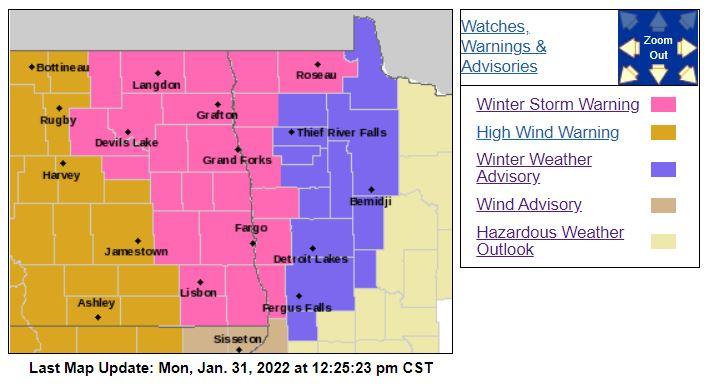 Seasonably warm for today but on the breezy side with 10-20 mph winds from the south gusting up to 30 mph. As an Alberta Clipper rides to our north along the Canadian border, a wintery mix and snow showers will track across eastern North Dakota late this afternoon and evening, creating some slick roads. Tonight, winds ramp up behind a cold front between 20-40 mph, gusting as high as 60 mph, creating more icy roads and drastically reduced visibility. Blowing snow will stretch into Tuesday before winds lighten up by the end of the day with more brutal arctic cold for Tuesday night through Thursday.

The winter storm warning is from 6:00 PM this evening through Tuesday until 3:00 PM. The warning is for a mix of rain with freezing rain or sleet and scattered snow showers late this afternoon and evening. With high temperatures in the upper 20's to mid 30's today, roads will melt off any snow or ice on them, causing wet roads, some freezing rain/drizzle, and or sleet with some snow showers will add to slick roads this evening. As temperatures drop tonight, the roads will refreeze. With gusts as high as 30 mph from the south this evening, possible drifting snow could create a polish-like finish to the roads, especially overnight as blowing snow increases from strong winds.

Winds then pick up overnight around midnight from the west-northwest after a cold front moves through between 20-40 mph and gusts as high as 60 mph. These strong winds will create widespread blowing and drifting snow, especially in the open country. The full extent of the blowing snow remains a little questionable. Mainly because a lot of the fluffy light snow has already been blown around. Additionally, warmer temperatures today and potential freezing rain may lock some loose snow in place. But I still suspect widespread blowing snow will occur with the minor accumulation of new snow this evening. Even with a crust on the "old " snow pact, winds will likely be strong enough to break through that crust. (Blizzard conditions will be possible overnight into Tuesday).

Total snow accumulations around the F/M metro will be less than an inch to trace amounts and up to three inches in the far north valley and northwest Minnesota. (Attached below is the expected snow accumulation. Keep in mind most of this will blow around)

Blowing snow will continue into Tuesday morning and possibly into the afternoon as strong winds remain between 20-30 mph, gusting as high as 50 through Tuesday morning. Morning commutes will be difficult with icy roads and reduced visibility. Winds will eventually lighten up as we head into Tuesday evening as temperatures fall through the single digits bottoming out o a low near -16 Tuesday night.

Cold arctic air will then settle in place for Wednesday and Thursday. Temperatures will only peak near -5 Wednesday afternoon and drop to an overnight low near -26. Factor in 5-15 mph winds, wind chills will drop to 40-55 below. Frostbite can set in in a matter of minutes at that temperature. Highs remain below 0 Thursday near -6, but the good news is temperatures break back above zero as we head into next weekend.

Make sure you keep up to date on the latest road conditions. Links are provided below! 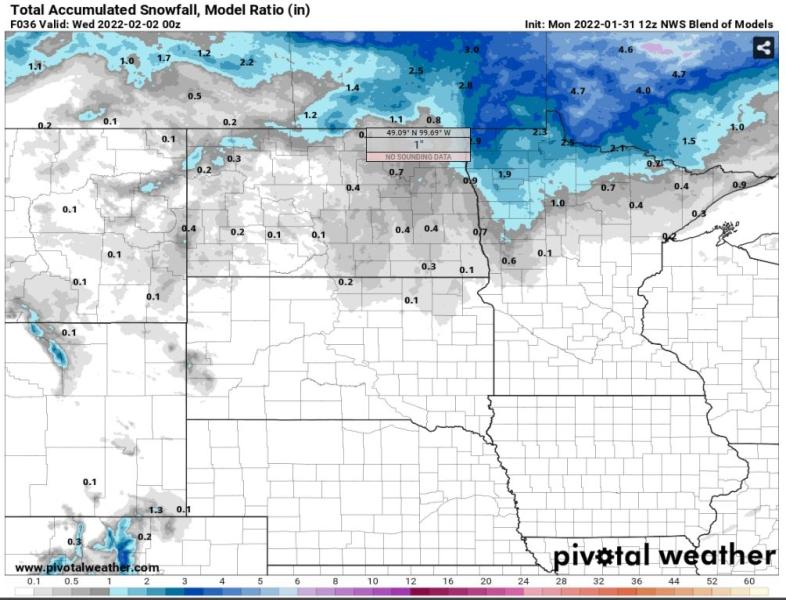